I’ve uploaded it to a public Git repository which you can download with the following command:

Next Wednesday I will be attending the Automotive Linux Summit 2012.

It will be a good time to meet the key people pushing the usage of Linux in the automotive arena and I hope to have a great time at the Heritage Motor Centre in Warwickshire.

If you happen to attend the event and want to have a good chat with an Igalian about any of the technologies in which we are strongly involved: WebKit, rendering, compilers, Grilo, GStreamer, the kernel, Qemu, Yocto, OSTree, Skeltrack, OpenCV, a11y, Qt, Gtk+ and so on. Just poke me whenever you see me around 😉

Going quickly to the “ham”, if you are running Ubuntu Precise on your machine and want to have Grilo support including its UPnP plugin in totem and rhythmbox just add Grilo Team‘s PPA:

Then, pull down the latest list of software including the PPA you just added:

Install the needed packages and upgrate any old one:

That’s it! Enjoy your Grilo powered totem and rhythmbox!

Last weekend I found some time to resurrect my dear NSLU2 which passed away some months ago when its attached USB hard drive started failing. I have reports from several USB hard drives dying while being attached to a NSLU2 so I may have to take a look to that at some point, but that would be in another moment.

Thanks to good Martin Michlmayr I only had to follow quickly his installation guide and I could have the Debian Squeeze firmware image he provides running smoothly in a matter of minutes.

Afterwards, I followed the counsels of Juan and Mario to tweak my Slug.

The customization to highlight was adding a MediaTomb server since one of the main features that I wanted to add to my Slug was the possibility of serving audio and video through UPnP.

Everything seemed in place but, when I checked in my desktop running Ubuntu Precise how to access my music from rhythmbox and my videos from totem I had a sad surprise. None of them have UPnP support and, what is worse, none of them have Grilo support out of the box in Precise. And I say worse because, among other plugins, Grilo already provides UPnP support and AFAIK, totem and rhythmbox have upstream Grilo plugins for quite some time already.

So, what was the problem? Why weren’t they in Precise?

Well, in the case of rhythmbox it seems just a small mistake in the debian packaging, as it is pointed in this report in Launchpad’s bug 973295. Astonishingly, it has not yet been fixed!

Hence, I downloaded the sources for the precise-proposed rhythmbox’s package and I did the proper changes and uploaded it to the Grilo Team PPA. 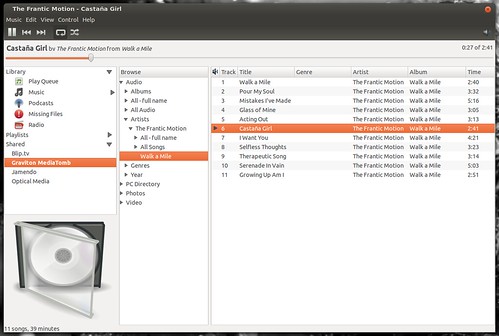 In the case of totem what happened was that Grilo’s plugin was removed as for the version that was packaged for Precise, in the road to add a new and better plugin for Grilo 0.2. Which is what it is in totem upstream nowadays.

Therefore, I re-took the old patch for totem’s Grilo 0.1 plugin in GNOME’s bug 628648, downloaded the sources for the precise-proposed totem’s package, patched and uploaded it to the Grilo Team PPA. 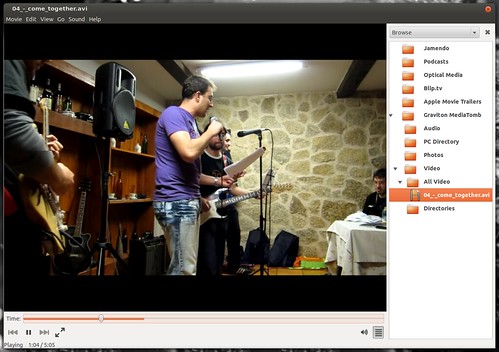 In the path for all these changes I joint the Grilo Team at gitorious and made also some changes to its packaging.

Now I can enjoy my UPnP served music and videos from my favorite applications in GNOME!!!

Hopefully, for the next Ubuntu’s release we will have Grilo 0.2 already integrated and totem will come with its plugin out of the box. By now, rhythmbox’s Grilo plugin has yet not been migrated.

Grilo 0.2 is a great library for accessing the media content from several resources. Juan, the Grilo master, has been working in Igalia writing a new, clean, easily extendable and powerful API that is ready for use and which keeps enhancing everyday. However, Grilo’s adoption is coming surprisingly slow. Out of GNOME other projects have shown quite some interest as it was the case of Media Explorer, but in GNOME I only know of its support by the 0.2 version in totem. Anyone willing to bring the power of Grilo to Music, rhythmbox, banshee and the like? 😀

Update: It seems I rushed too much since Jonathan Matthew migrated rhythmbox Grilo plugin to 0.2 pretty recently. Thanks Matthew!